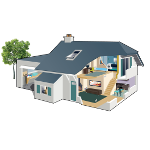 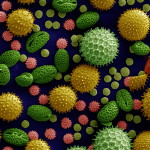 Air pollution is a complex and constantly changing mixture of chemical, biological and physical elements.

These components can be toxic to people, and since we inhale up to 20,000 liters of air daily, if they contain pollutants it can have harmful effects on human health.

The pollutants found in the atmosphere can be produced by human activity, it will then be called anthropogenic pollution. It can also be linked to natural activity, for instance the products of volcanic activity, soil erosion, sand winds, or natural pollution produced by the oceans.

With regard to human activity, all sectors of activity can produce air pollutants: industrial activities, road transport, but also air and rail transport. Domestic activities, and more specifically heating (fuel, wood, etc.), will produce pollutants. The same goes for all agricultural activities...

The observed pollutants in the air are not all emitted directly from these sources. They also result from physico-chemical reactions between chemical components (primary pollutants and other constituents of the atmosphere) governed by meteorological conditions.

Understanding the pollutants we are exposed to.

In order to have a good understanding of the pollution phenomena to be able to elaborate forecasts, a thorough knowledge of the pollutants, their sources, the quantities emitted by each pollution source over long periods (the year) and the geographical distribution of the emissions is necessary. All these variables change very significantly at various times of the year, and even at different times of the day.

In France, the Centre Interprofessionnel Technique d'Etudes de la Pollution Atmosphérique (CITEPA) is the reference organization in charge of the realization of national atmospheric emission inventories which are reported in the International Conventions (CLRTAP, UNFCCC in particular).

Regional inventories are carried out under the responsibility of the AASQA (Associations Agréées de Surveillance de la Qualité de l'Air), and a National Spatialized Inventory (INS), carried out by the Ministry in charge of the environment, which came into being in 2013. The INS records the emissions of more than fifty air pollutants with spatial and temporal resolutions up to the hour and km2 respectively.

Indoor air pollution is made up of a great number of pollutants which have their source in the combination of our activities with the components which constitute our environment.

Fine particles PM2.5, smaller than 2.5 µm in diameter, have an impact on mortality and cardio-respiratory diseases. Various chronic pathologies (cancers, cardiovascular and respiratory pathologies) develop after several years of exposure to these particles, even at low concentration levels.

Other effects are becoming more and more visible: possible effects on reproduction, risk of premature birth, damage to neurological development in children, dementia in the elderly, etc. Today, particulate matter is the air pollutant for which the health effects are the most documented.

Even if we are only exposed for a few hours to a few days (acute, so-called short-term exposure) to this pollution, we may experience the following symptoms : eye or respiratory irritation, asthma attacks, an exacerbation of cardiovascular and respiratory disorders that may lead to hospitalization, and in the most serious cases, death.

If we are exposed to air pollution for several years (chronic, so-called long-term exposure), we may experience physical health effects. There are cases of chronic diseases such as cancers, cardiovascular and respiratory pathologies (asthma, chronic obstructive pulmonary disease, heart failure), neurological disorders, etc.

In France, chronic exposure to air pollution leads to the most important and harmful impacts on health and the share of health effects attributable to pollution peaks remains very low (source: ANSP). The predominant health impact of air pollution is due to long-term exposure, throughout the year, to the different means of pollution and not to peaks.

Satisfied or money back !
for 30 days